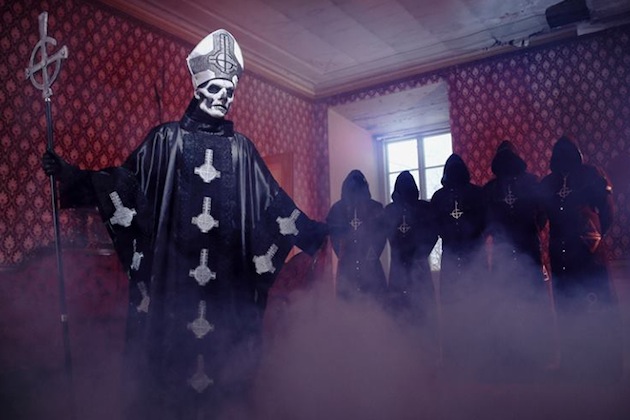 The rise of Swedish metal act Ghost B.C. (Ghost) will forever be connected to the soundscape of 2013. From relative obscurity, Ghost experienced an unparalleled ascension last year, becoming one of metal’s most popular acts thanks in part to ‘Infestissumam,’ the band’s sophomore album. However, like any act whose rise commands universal attention, Ghost have received both immense praise and vitriolic criticism.

A few years ago, Invisible Oranges published a great piece called ‘Why Ghost Matters.’ The post was written long before Ghost experienced their meteoric rise and made some great points on the importance of a band who would later go on to open for acts such as Iron Maiden and Slayer. Now, we offer our own editorial on Ghost’s success and why the cult metal band deserve every bit of the praise they’ve received.

Ghost have proven that the progression of popular metal doesn’t just have to go in a heavier or faster direction with breakdowns and increasingly deeper guttural vocals. In the early 2000s, metalcore became metal’s most dominant and commercially popular style, and with the rise of the Internet, influence from bands such as Killswitch Engage, As I Lay Dying and Avenged Sevenfold spread around the globe instantaneously. Suddenly, it seemed like every upstart band was using metalcore elements, somewhat watering down the genre at an accelerated speed.

The popularity of metalcore soon gave rise to deathcore, with Job for a Cowboy, Suicide Silence and many others accumulating millions of fans extremely quickly. However, within a few years, deathcore also suffered from a “too much, too soon” influx and in the years to follow, buzz bands continued to tune their guitars lower, rely heavily on breakdowns and bring guttural vocals down to a frog’s croak.

Despite the dominance of metalcore, deathcore and the direction which the genres seemed to point towards, Ghost broke through the glass ceiling of unmistakable success with ‘Infestissumam.’ Suddenly, both casual and hardcore metalheads were turned on to a melodic band with clean singing, barely-distorted guitars and beautifully immersive soundscapes.

Although the members of Ghost don’t play a highly-technical style of music, they still provide a challenging listen for fans, ultimately delivering a more rewarding outcome. Firstly, Ghost challenge the listener’s perception of what metal can be. Some consumers just hear a rock band, but those with more experienced ears can hear a plethora of nuances connected to many metal sub genres. Starting off with a gloomy foundation reminiscent of Black Sabbath, Ghost build a complex puzzle of influences. Characteristics of Mercyful Fate and King Diamond can be found throughout Ghost’s entire instrumental section — organ-like keyboards included. Additionally, Ghost touch on classic doom metal sensibilities for an effective use of sonic subtext.

As for Ghost’s music itself, the key for the most immersive experience possible lies within a virtue of patience. The Swedish band rarely delivers exactly what the listener wants right away, never showcasing a restless section in either ‘Opus Eponymous’ or ‘Infestissumam.’ The use of unresolved vocal progressions in tracks such as ‘Elizabeth,’ ‘Jigalo Har Megiddo’ and ‘Body and Blood’ create an uneasy feeling within the listener, while the seven-and-a-half minute ‘Ghuleh / Zombie Queen’ goes into prog territory not meant for one who seeks instant gratification. Much like many great acts, Ghost offer simplicity at face-value while pointing towards treasure for those willing to dig. Once understanding is acquired, a unique feeling of ascension possesses the listener entirely.

The Voice of Papa Emeritus:

The voice of Papa Emeritus is that of candy-coated poison. There is a charm and sweetness to his style, but what lies beneath is what true psychological horror is all about. Papa Emeritus’ voice is the serial killer veiled by a facade of sanity, the open arms of the comforter waiting to betray your trust, the cloaked witch who lures children into her coven’s den. “All your dreams will come true.”

Make no mistake, Papa Emeritus is the spiritual leader of the Satanic cult known as Ghost, and his goal is to acquire followers through the medium of music. He possesses a voice which lures you in like the Pied Piper. Emeritus is well-spoken when singing, enunciating perfectly, whether it be a whisper, soft carol or anthemic chant. There is a childlike innocence in his vocal style, but with a precisely placed hiss, the listener can sense a darkness within Papa Emeritus. The vocalist will never unleash a guttural attack, but the malicious intent behind Papa Emeritus’ warmth is the absolute pinnacle of how effectively the theme of terror can be used in metal music.

For centuries, religious groups have used the power of uplifting music to entice converts and recruit potential followers. Does one truly feel more in touch with God than when they’re singing his praises? Ghost understand this power and inject it into every note they play, beginning to dabble with this theme in ‘Opus Eponymous.’ After calling for the sermon’s commencement with the beautiful organ-driven ‘Deus Culpa,’ Ghost deliver hymns like ‘Stand By Him’ and ‘Satan Prayer,’ extending praise towards Satan throughout the group’s debut offering.

With ‘Infestissumam,’ Ghost elevated and further perfected their Satanic cult concept by composing grander works such as the album’s title track, ‘Year Zero’ and ‘Ghuleh / Zombie Queen.’ Ghost also used religious chant to greater effect in ‘Infestissumam’ with ‘Per Aspera Ad Inferi’ and ‘Monstrance Clock,’ the latter of which decrees, “Come together / Together as one / Come together / For Lucifer’s son.” The overwhelming historical success of how religious music has lured in followers only brings more authenticity to Ghost, as the band has used the exact same tactic to acquire legions of followers themselves. History truly does repeat itself.

On the topic of authenticity, Ghost is not a band that simply records church-like tracks and dresses their singer like an evil Pope. The main songwriters of Ghost possess a great deal of religious knowledge, showcasing authenticity by the band’s use of the Latin language and religious characters in both ‘Opus Eponymous’ and ‘Infestissumam.’ Satan is often referred to by the alternate agnomen, Sathanas, while the track ‘Year Zero’ conjures the biblical demons and beasts Belial, Behemoth, Beelzebub, Asmodeus, Satanas and Lucifer.

The black-robed ghouls also offer their own perceptions of biblical script. In a recent interview, we asked a nameless ghoul how Ghost was connected to biblical verse Revelation 12:9, which reads, “And the great dragon was cast out, that old serpent, called the Devil, and Satan, which deceiveth the whole world: he was cast out into the earth, and his angels were cast out with him.” The ghoul responded, “The whole idea of a rebellious angel taking shape as the Devil as we know him, traditionally; it’s pretty much based on what is written in the Bible. Since we are all about devil worship, in line with what is biblical; had that not been written, we would probably not be here.”

Why should any band be restricted to only developing its craft solely in a sonic medium? Despite what naysayers may spew out, Ghost is not a gimmick band, although they obviously take their concept beyond audio confines. Adorned with black robes and masks, the nameless ghouls seek to eliminate individual personality traits within the act’s instrumental section. This falls in line with well-documented ideals adopted by the majority of bizarre cults.

Papa Emeritus is the only definitive character within Ghost’s lineup — its prophet. This allows Ghost’s leader to become the sole center of attention, further authenticating the dynamic of a cult and the role of its mortal spiritual vessel. Emeritus commands admiration by presence alone, delivering his lyrical messages with unwavering grace. Papa Emeritus will often extend his hand to his crowd’s front row, which awakens a primal urge within followers to make contact with their prophet, as evidenced by frantic concertgoers who practically climb over each other just to touch the glove of Emeritus’ extended hand.

Stepping into a Ghost ritual, you’re greeted with an all-out production. Along with the senses of sound and sight, Ghost also entice your sense of smell during live performances, burning enough incense onstage to fill any club with the desired scent Ghost have chosen to offer their followers. “In many ways, we have a very similar approach of touching people in the same way the church has always done,” the nameless ghoul explained to us about Ghost’s live show. “We are creating a solemn moment where you are tickled visually, musically, with scent… some get tickled sexually; we do, too. We’re doing something very similar to the old traditional way of putting emotions into people by overpowering them with expression.”

Ghost put on a spectacular live show. Using a detailed backdrop mimicking the inside of a cathedral, Ghost reveal stained glass windows and religious artwork meant to praise demonic biblical figures. A menacing fog also engulfs the stage while Ghost recreate the sound of their albums without flaw. Every little brick used to build the wall of sound in Ghost’s recorded material is present in their live setting. It’s a feat that most bands can’t or don’t attempt to pull off, but with Ghost, the undertaking feels seamless.

The Use of Theatrics:

With the band’s rise in popularity, a flux of negative criticism has been aimed at Ghost due to their use of costumes, makeup and props. Naysayers will automatically attack Ghost’s theatrical characteristics, writing the group off as nothing more than a gimmick act. However, when Iron Maiden’s Bruce Dickinson goes through costume change after costume change to enhance live performances of ‘The Trooper,’ ‘Seventh Son of a Seventh Son’ and many other tracks, is he criticized for it? Is AC/DC guitarist Angus Young denounced and despised for wearing his trademark schoolboy outfit onstage? Is Judas Priest vocalist Rob Halford condemned for riding a motorcycle onstage while he and the rest of the band are completely covered in leather?

How about Alice Cooper? The heavy metal icon has donned makeup and costumes for well over 40 years and is rightfully known as a metal god. His backing band also looks the part while Cooper “kills” people onstage and unleashes a ton of theatrics throughout his show. What about King Diamond? His classic makeup and persona have undoubtedly enhanced his creative vision. Did Ronnie James Dio, perhaps metal’s all-time greatest vocalist, obstruct his own greatness by wielding swords and slaying dragons? Absolutely not.

Of course, Ghost have a long way to go before they attain such status as those listed above, but why impede your multidimensional vision over fear of criticism? Theatrics have been a metal staple since the genre’s inception, so why should we turn our backs on it now? Also, keep in mind that Ghost have succeeded in one way that no popular band ever has. After over five years of making music, two studio albums, one EP and an impressive spike in popularity during 2013, we still legitimately do not know the identities of those behind the masks. Although theories of Papa Emeritus’ true identity have circulated for years, Ghost’s nameless ghouls remain nameless. How they’ve been able to keep this secret in a world where information is more available than ever is truly remarkable.

If Ghost aren’t your cup of tea, there’s absolutely nothing wrong with that. No matter your personal taste, the inherent subjectivity and limitless interpretation of music creates one universal rule: there are no wrong answers. However, for the reasons listed above, we humbly accept the cult’s communion, consuming the body and blood of Ghost while imparting great praise and devotion.