Metalsucks.net: Ghost Will, Indeed, Have a Papa Emeritus III 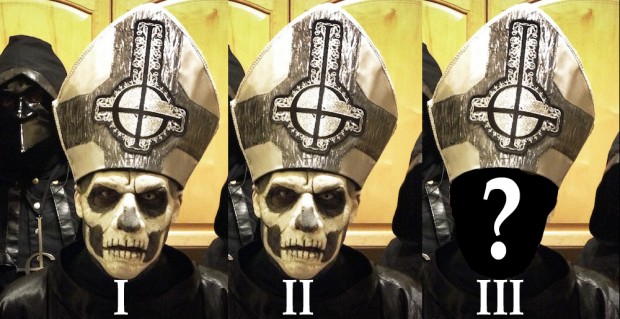 As threatened last year, Ghost are apparently planning to once again “switch” singers and introduce (excuse me — induct) Papa Emeritus III this summer. Emeritus III, of course, will replace Emeritus II, who replaced Emeritus I in 2013. And by “replaced,” I mean “is really the same guy with the same make-up and the same costume but a different name.”

I guess what I’m saying is, I do not understand why the band keeps doing this.
I mean, I get that Ghost’s whole thing is to futz around with the theme of rituals, but surely, there are cleverer ways they could do this than to pull a fake singer swap every album cycle.

Have they considered, for example, performing an on-stage bris? That is something that I know no band in any genre has ever attempted. It would really be something. It would also provide a much-needed service for young couples in need of a fun night out after recently enduring the process of child birth and a good mohel. Just a thought.

And yes, I said “every album cycle,” meaning the reason they’re “switching” singers is because they’ve got a new record in the works. No word on a release date for that yet but don’t worry, I’m sure we’ll beat you over the head with the details as soon as they’re made available. In the meantime, the band are planning to debut some new material live this summer, which means — you guessed it! — STAY TUNED FOR SHITTY CELL PHONE FOOTAGE OF A NEW GHOST SONG! YAY!!!!!!!!