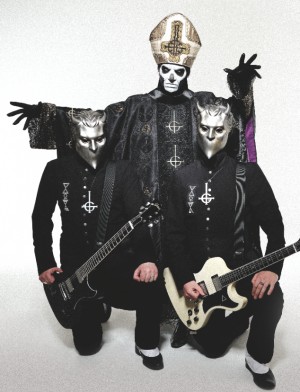 Another interesting interview with Ghost but with GuitarWorld.com. They discuss about “Meliora”, staying anonymous, & guitars.

When Guitar World catches up with Nameless Ghoul, one of five similarly monikered members of Ghost, he’s relaxing at his home in Linkoping, Sweden, in anticipation of a round of live gigs with his band. Apparently, even ghouls need rest sometimes.

But the fact is that the guitarist and his fellow ghouls have been quite busy as of late, as Ghost recently completed work on their third full-length album, Meliora (there’s also the issue of the band announcing yet another new singer, Papa Emeritus III, who, as coincidence would have it, looks and sounds exactly like his forerunners, Papa Emeritus and Papa Emeritus II—read into that what you will).

You can read the full interview over at GuitarWorld.com