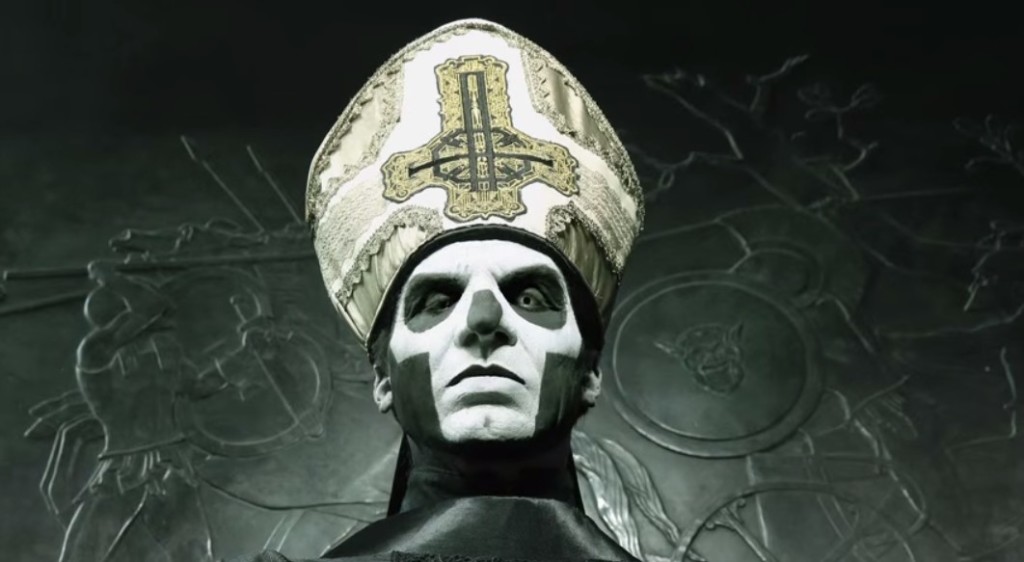 When the Pontiff visits Philadelphia, for the World Meeting Of families, September 26th – 27th, the City of Brotherly Love will almost completely be closed down, for security reasons. Bridges closed for days, all the major highways in and out of the city, shut down and a several square mile grid of downtown restricted to travel on foot. Thus many of the city’s museums, theaters, and concert venues will close.

The opportunity to play a few blocks from the real pope was too rich to pass up. The booking was no coincidence. Promoter Sean Agnew saw potential in billing the act as “Ghost vs. Pope,” a religious head-to-head, a “Battle For Philadelphia.” The concert sold out almost immediately.To promote the Philadelphia show, the band produced mock-evangelistic videos of an older, sinister woman preaching from a pulpit.

“The band wanted to get really creative, and have their own Ghost motorcade where the singer would go around the city,” said Agnew, who runs R5 Productions. “We had these great ideas to create an alternative to the Pope. But more and more stories started to come out about the lockdown. We had to scale back.”

In the end, the real Pope won.

The Union Transfer, on Spring Garden Street, is inside the “traffic box,” the zone created by the city of Philadelphia to restrict traffic. While the front door of the venue is technically outside the box, parking in the rear lot or anywhere near the building will be nearly impossible. Not only will loading-in the band’s large stage props – suggesting a black mass – require divine intervention, curtailed train service throughout the city will smite the travel plans of most fans.

Citing logistic complications, Ghost has postponed its Philadelphia concert to a friendlier time, the following Tuesday.