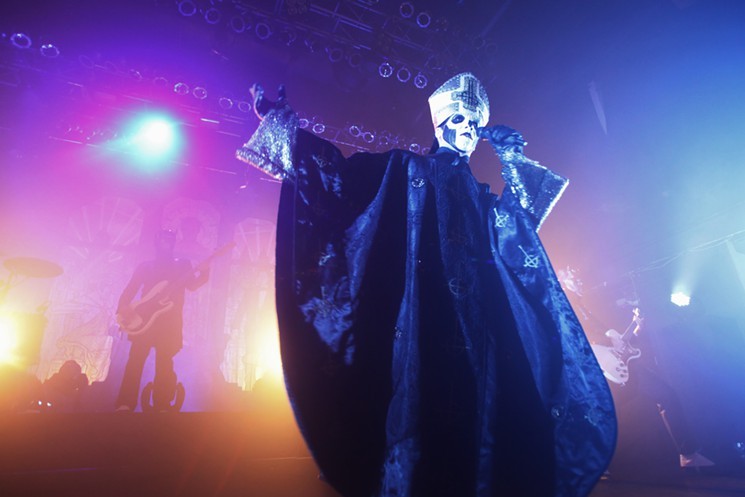 Move over, Pope Francis, there’s a new pope in town. Sure, Papa Emeritus III’s miter may bear an upside-down cross, and the word “Lucifer” may be intoned onstage with seeming glee, but Ghost’s own front-pope held the Sunday-night masses in thrall with his rock ‘n’ roll benedictions and stately bearing. There was Latin; there was swooning (sweatily, with metal horns thrust aloft); there were men, women, and children of all ages lustily intoning, “Belial, Behemoth, Beelzebub, Asmodeus, Satanas, Lucifer” from the song “Year Zero.”

Are Ghost calculated? Yes. Are they shticky? Yes. Are they good? YES. Listen if you like anthemic, melodic Euro-metal with shades of Marilyn Manson (the intensity of a “Beautiful People”), Queen (grandiose layers of sound), and (the campy vibe of and Paul Williams’s stellar songs from) cult filmPhantom of the Paradise. The Swedish-born band — rounded out by “nameless ghouls” on bass, drums, keys, and two guitars — strode onto a stage bathed in bloody red light, then launched into “Spirit,” the first song from their new, third album, Meliora (Latin for the pursuit of something better).

You can read the full review at villagevoice.com