Ghost is the name of a devil worshipping ministry, that in order to spread its unholy gospels and, furthermore, trick mankind into believing the end is ultimately a good thing, have decided to use the ever so popular rock music medium as a way to achieve their ends.

Standing motionless and anonymous beneath the painted faces, hoods and robes which their sect demand, the six nameless ghouls of Ghost deliver litanies of sexually pulsating heavy rock music and romantic lyrics, which glorify and glamorise the disgusting and sacrilegious, with the simple intention to communicate a message of pure evil via the most effective device they can find: Entertainment. This is Black Metal at it’s most original and deceiving; compositions such as “Ritual” and “Death Knell” majestically weave their melodic spell of evil through the senses until the listener finds themselves utterly possessed and open to any diabolical suggestion.

In May 2010 Ghost were contracted to a UK based gramophone company called Rise Above Ltd, who swore an oath stating that they will assist the group in the task of spreading their musical blasphemies through formats such as Compact Discs, Long Playing Vinyl Records and Digital Downloading.

The first full-length Ghost album ‘Opus Eponymous’, a daringly beautiful combination of satanic rock music with an almost unthinkable pop sensibility, is to be released on 18th October 2010. It is understood and agreed that Rise Above Ltd will invest heavily in areas such as magazine advertising and retail marketing and employ the services of music publicity specialists in order to expose the music of Ghost to the wider public. Specific attention will be paid to targeting people (research suggests these are most likely to be adolescents) who have a void in their life, perhaps caused by some form of emotional trauma or upset, that can be filled by the music and philosophies of Ghost. In time, these easily manipulated children will come to share the views and goals of the Ghost ministry and can prepare their own plans for the downfall of humanity….

On December 15, 2012, Ghost performed a special show in their hometown, Linköping, where they debuted the new song titled “Secular Haze”, which was released online earlier that day, and their cover of ABBA’s “I’m a Marionette”. At the same show, they introduced Papa Emeritus II as the successor to the band’s frontman Papa Emeritus—believed to be the same person simply playing a new character. On December 20, the band announced that their second album, Infestissumam, would be released in early 2013. It was released in North America by Loma Vista Recordings in partnership with Republic Records—a division of Universal Music Group—marking Ghost’s major label debut.

On February 5, 2013, the band announced a name change to “Ghost B.C.” in the United States for legal reasons. A Nameless Ghoul said, “B.C. is obviously a pun on ‘Before Christ’, but it’s just an amendment. In our world, we’re just gonna be called Ghost … The B.C. is silent, and as soon as we can, it’s gonna be taken away forever.” They officially dropped the amendment from their name in 2015.

On March 12, fans could access a new song online titled “Year Zero” if they promoted the band on Facebook by endorsing the election of its frontman as the next Pope of the Catholic Church. Infestissumam was originally scheduled to be released on April 9 in the US, but the band could not find a US company that would manufacture the CD. Four US CD manufacturers rejected the job because the artwork for the deluxe edition of the album was described as “basically a 16th century illustration of an orgy”. Rather than delay the album further, the band decided to use the artwork from the regular edition for the US pressings of the deluxe edition and announced the new release date of April 16. All European copies and the US vinyl versions include the controversial artwork. Ghost began their “Haze Over North America” tour on April 12 at the Coachella Festival, which consisted of about twenty dates in the US and Canada, and continued until May 18.

In 2013, Ghost embarked on a massive world tour and performed at several music festivals, including the 2013 Download Festival and Sweden’s Metaltown. On July 27, Ghost began a six date tour, which was supported by Skeletonwitch. This tour was titled the “Still Hazing over North America Tour”, signifying a continuance of the earlier tour. It ended in Chicago at the Lollapalooza festival. Immediately after, Ghost toured South America supporting Iron Maiden and Slayer; this tour included a performance at Rock in Rio. Ghost opened for Avenged Sevenfold and Deftones on a US tour in October. In November, the band toured the UK with Alice in Chains.

On November 20, 2013, the band released the EP If You Have Ghost, consisting almost entirely of cover songs. It was produced by Dave Grohl of Nirvana and Foo Fighters fame. In late 2013, Ghost returned to Sweden before embarking on an early 2014 tour of Australia, which was followed by a Scandinavian tour. On January 18, 2014, Ghost won the Grammis Award for Best Hard Rock/Metal Album for Infestissumam. They then embarked on the “Year Zero Tour 2014” which lasted from April 17 until May 17 in North America. In July 2014, they performed at the European Sonisphere Festival.

Ghost’s third studio album, the follow up to Infestissumam, Meliora was released on August 21, 2015. In an advertisement for the album that aired May 28 on VH1 Classic, it was announced that Papa Emeritus II was “fired” and that his successor Papa Emeritus III is his younger brother by a full three months. The song “Cirice” was released as a free download from the band’s official site on May 31, and is currently nominated for the 2016 Grammy Award for Best Metal Performance. Papa Emeritus III was officially unveiled with a debut performance in Linköping on June 3, 2015, where the band also performed new songs from the upcoming album. The album was first promoted in August by a five date unplugged tour named “Unholy/Unplugged” of record shops in the US. Here Papa Emeritus III sported slicked-back jet black hair without his trademark Mitre, and performed alongside the two guitarist Nameless Ghouls; accompanying them on the kazoo. A tour of the US titled “Black to the Future” began on September 22 and ran until November 1. This was quickly followed by a European tour of the same name that ran until December 21, including a full UK tour.

On September 12, 2016, the band released a new track on a radio show titled “Square Hammer” and a new EP, “Popestar”, was released on September 16, the same day the Popestar Tour began. Following the conclusion of the North American tour that concluded on November 12, was the European tour of the same name which started in late March and finished in late April 2017. They were the opening act for Iron Maiden on their 2017 North America tour from June to July 2017. A Nameless Ghoul stated that after the tour was over, they would be writing and recording the new album which they stated would be much darker than Meliora.

On April 13, 2018, Ghost released a new single, titled “Rats”, along with an accompanying music video. This marked the first release from the band, with their “new” frontman Cardinal Copia. Additionally, the band welcomed a new character, saxophonist Papa Nihil, extending Ghost into a septet. The album was titled “Prequelle”, and it was released on 1 June 2018. A second song from the new album, ‘Dance Macabre’ was initially released on the band’s Instagram stories but later that day was made available for streaming in its entirety on 17 May 2018.

To promote the album, Ghost began the “Rats On The Road” tour in the United States which ran from May 5 until June 1.

Ghost began “A Pale Tour Named Death” in London, England at Royal Albert Hall on September 9, 2018. A North American tour of the same name began began October 25 featuring two headlining arena shows in Los Angeles and New York City. An early 2019 European tour of the same name was announced on September 10, 2018. Ghost was later announced as the opening act for Metallica’s WorldWired Tour from May to August 2019. 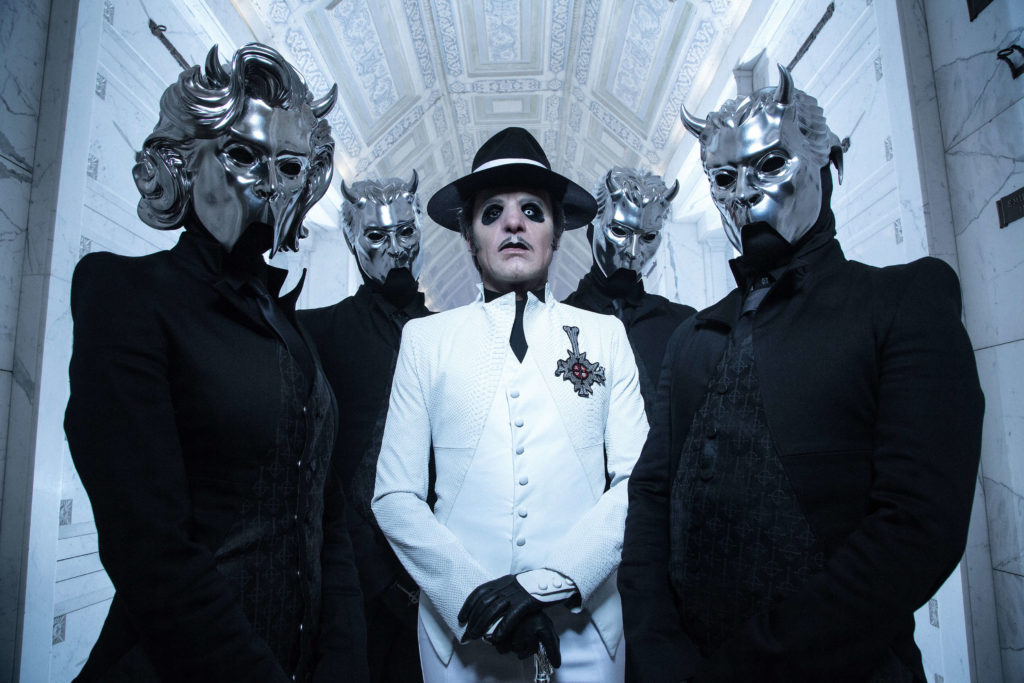